Microsoft Comic Chat is a graphic IRC client created by Microsoft, first released with Internet Explorer 3.0 in 1996. Comic Chat is a new kind of graphical chat program developed at Microsoft. As users type text into Comic Chat, a comic strip unfolds showing the various participants in the conversation as comic characters, and their utterances in word balloons.

Your online conversations are the beginning of an interactive comic strip that unfolds in real time. Completely integrated with Microsoft Internet Explorer, Comic Chat can be used like any text chat client on an IRC channel. Like other chat clients, you type in the text to communicate. With Comic Chat, the similarity ends there. The character that you select, along with other comic characters, comes alive panel by panel. Balloons display your conversation and clever gestures give your character a variety of emotions and movements. 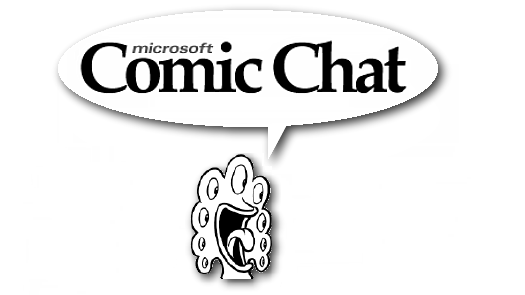 On the fly, each Comic Chat client automatically determines a number of aspects related to comics generation. These include: