Date Released: March 19, 2009
File Size: 147 MB
Operation Systems: Windows XP/Vista/2003/2008/2008R2
Last Updated: November 02, 2019
Windows Internet Explorer 8 is the eighth version of the Internet Explorer, released on March, 2009. The Internet Explorer 8 has security improvements, the private browsing option, as well as the ability to save pre-defined “slices” of a Web page for at-a-glance viewing.
The biggest change – the decision to make the browser better adhere to modern Web standards. That should make life easier for Web developers in the future, but also poses compatibility challenges for sites that are optimized specifically for older versions of IE. In part to address this, Microsoft has a “compatibility” mode that lets Web sites indicate if they would prefer to be run by an engine that is more like older versions of the browser. 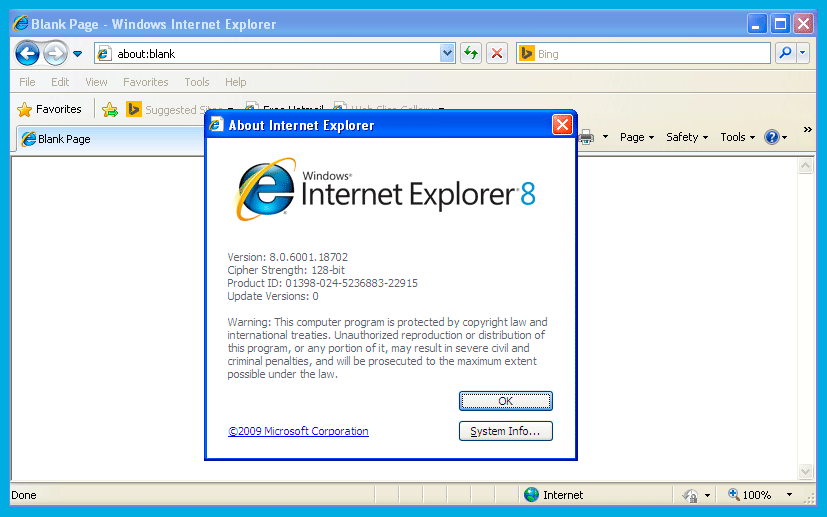 This release of Internet Explorer comes as Microsoft has been losing share to leading rival Firefox and also seeing stepped-up competition from Google and Apple, among others. The world market share of Internet Explorer, which was more than 80 percent in 2004, ended last year at just above 60 percent, according to the Net Applications company.
The Google has been touting the performance of their new JavaScript engines, but Microsoft has sought to downplay speed concerns. The company has released a video it says shows that, in many cases, IE 8 is just as fast as other browsers in loading popular Web sites.
“Generally the difference could literally be measured by a blink of an eye,” said Microsoft Senior Director Amy Barzdukas. “That kind of speed becomes almost a push.” Despite IE’s waning share, the European Union has said it is considering sanctioning Microsoft for bundling a Web browser into its operating system in the first place, a move that it says appears to violate its antitrust laws. A version of Internet Explorer 8 also be built into Windows 7, though it is one of many Windows components that users be able to turn off if they wish.
As for the future, Microsoft is not saying anything about its browser plans, but corporate vice president Mike Nash did seek to quash speculation that Internet Explorer 8 will be the end of the road.
“I can’t say what it will be called,” he said of the next version of the browser. “But we’re not done.”
Microsoft Internet Explorer 8.0 is not supported anymore. However, you could find and download the final releases Internet Explorer 8.0 for Windows below on this page.
Download IE8