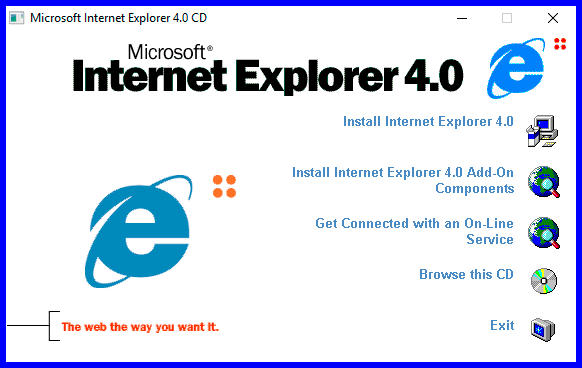 Internet Explorer 4.0 has supported the latest Internet protocols and standards, including Hypertext Markup Language (HTML) 3.2, Java, ActiveX, JScript, Microsoft Visual Basic Scripting Edition (VBScript), and Dynamic HTML. Several security enhancements have been added to the Internet Explorer browser, including support for security zones, Secure Socket Layer (SSL) 3.0 and Private Communication Technology (PCT) 1.0 protocols, client and server authentication, and the Platform for Internet Content Selection (PICS) rating system.
You can do several things to avoid many IE 4.0 issues before you even install the software. First, be sure to follow Microsoft’s instructions and uninstall all previous versions of IE 4.0 before installing the final version. If you simply try to install the final version over one of the prereleases, you’re asking for trouble. Second, IE 4.0 is a resource-intensive application, and what appear to be bugs may be nothing more than hidden weaknesses that have bubbled up through the cracks in a stressed-out system.
Before you install, check the following:
1. Check out the Things to note before installing section of the download pages.
2. Make sure your BIOS is up-to-date (check with your system vendor).
3. Make sure your video drivers are current (check with your video card manufacturer). This is extremely important in IE 4.0.
4. Don’t ask more of your system than it can give. Microsoft recommends a 486/66 with 8MB of RAM as a minimal platform for the browser-only version of IE 4.0 under Windows 95. If you want to use other features, including Outlook Express, you should have at least 16MB of RAM. And if you want to run other apps simultaneously with IE 4.0, the more RAM the better.
Microsoft Internet Explorer 4.0 is not supported and no longer available for download from Microsoft web site. However, you could find and download the final releases Internet Explorer 4.0 for Windows, Mac, and UNIX below on this page.
Download IE4