Date Released: 2018
Version: 2.9.0dev.5
File Size: 256 KB
Developer: Thomas Dickey
License: Freeware
Operation Systems: MS DOS
Last Updated: July 09, 2020Lynx is a simple text-based web browser for Microsoft Disk Operating System. It is the oldest web browser currently in general use and development, having started in 1992 and as of 2022, 30 years later, is still in use and development. 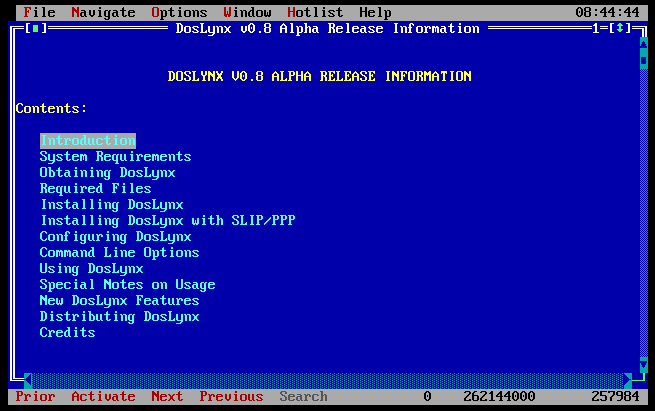 Lynx was a product of the University of Kansas, and was initially developed in 1992 by a team of ungradeated students as a hypertext browser used solely to distribute university information as part of the network and for browsing the Gopher Network. Version availability was announced to Usenet on 22 June 1992. In 1993, Developer added new features and released the final version 2.0 of the browser.
As of July 2007 the support of communication protocols in Lynx is implemented using the new kernel. The supported protocols include different protocols. Support for NNTP was added in 1994. Support for HTTPS was added 1996.
Garrett Blythe created Dos Lynx in April 1994 and later joined the Lynx effort as well. Foteos Macrides ported much of Lynx to VMS and supported it for a time. In 1995, Lynx was released under the GPL, and is now maintained by a group of free volunteers. The system requirements are: CPU 8086 and 512 kilobytes of computer memory.
Download
Category: Blog
Tag: MS DOS Web Browser Lynx